trying to get ninja v5 to run. Version is 5.3.84, running apache2.4 on ubuntu 20.04, ssh-connected to the remote server. Using mysql, ninja is in /var/www/html/invoiceninja (zip download), php version 8.0 on ubuntu and apache2 both. Also running some other servers with the apache, some using nodejs, some php, these work fine. I did the setup with php artisan generate:key and artisan migrate:fresh --seed. All fine so far.

I was able to reach ninja over <server>/invoiceninja/public/setup from my PC (external, not from the ubuntu server itself). Put in the information, tested PDF-generation, connection to database, email and the other fields. All worked, mail reached me, setup completed, .env was updated with the input data as well.

Any ideas/ways I can debug this further? I’m a bit confused since the setup worked, so the general dependencies seem to work fine, so are the connections/tests on setup.

Can you please check that mod_rewrite is enabled.

@david do you have any thoughts?

The module rewrite is enabled, .htaccess looks fine/was not modified:

Is that enough to enable mod_rewrite or do I have to make some additional annotations in the default conf of apache?

By the sounds of it, your APP_URL is missing the /public

add /public to your APP_URL

Though that still does not seem to fix the problem entirely, here again the error when trying to open /invoiceninja/public/index.php

Not sure if the error could be in the invoiceninja/config/livewire.php, looking at an older setup of invoice ninja I had ‘asset_url’ => env(…), in the current file it was just => null. I changed it as below: 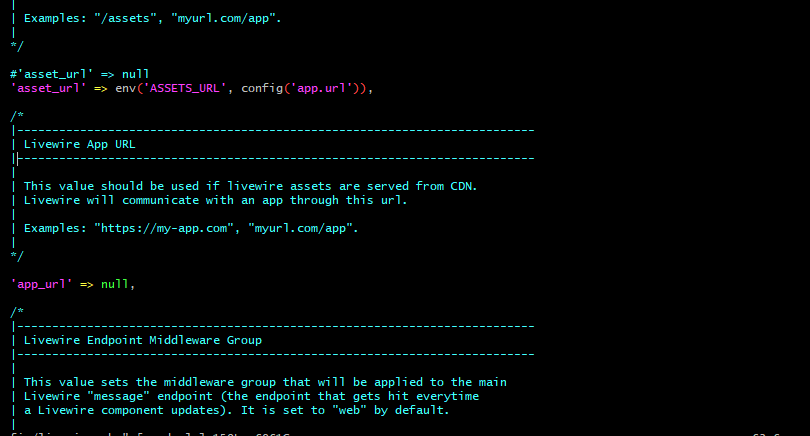 And now at least the Livewire Error is gone, though I still get a 500er when going to /public/index.php

Thanks again for the quick & targeted help.

Ok, I have not fixed it, but at least I understand the problem now. I did delete everything and did a new setup (though same apache, since there are other things running on it). Maybe it will help someone reading it later. The problem is not with ninja/the installation or something else, but with the apache2 routing/pathing. Now after the reinstall I can see the problem clearer.

And again me. It works now. Why? I can’t tell you. I didn’t do any changes to the apache2 itself. Installed Invoice again, then going to /ninja/public/index.php/ it correctly loaded and now it just works. Must have been some bad configuration/path to the vendor files, in the .env or whatever. No idea why it was not fixed the first few times I reinstalled, but I’m not going to complain.