Removing users that are in the DB, but not in the Interface

One question, Is it safe to remove users directly from the “users” table in the database? I remove users from the configuration interface and yet they still remain in the database, only to get email notifications at a later date and I can’t do anything to act on them. I would like to just remove them completely from the system.

If there is another path to control users that are missing from the interface yet still get email messages from the system, please let me know. In the past this has caused issues and having some way to control information IN sents out automatically is very important.

While in the database there are 9 (including the two expected above): 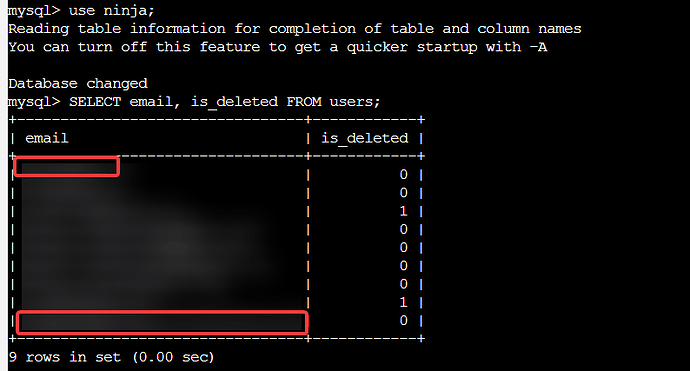 Two previously removed users get email notifications. I want to remove all but the two I have active from IN safely.

It sounds like a bug if deleted users are still getting notifications.

I attempted to try and surface the user in the interface so I could control its notification settings:

But, this did not work (also restarted the server, just in case still not seen).

As a general rule never manually delete anything in the database.

There are two tables of interest here.

The users table is the table which contains the user and their personal information.

This is the first time we’ve had a report that deleted users are receiving system notifications, so I’ll look into this and see whether i can reproduce this.

With more information you’ve provided about the database, I can show more of what’s going on in my database… hopefully it helps.

User ids 2, 4, and 6 have been “deleted” and have no representation in the interface to control notification settings yet they have begun getting email notifications (when is hard to say, but perhaps some logic in the application eventually allowed for this condition):

If there’s a way to just turn off the notifications such as:

@cwl that will work also.

I can see the issue on our side and a fix will be included in the next release.