I’m having all kinds of issues since the last update. I am currently using v5.3.68-C77, self hosted.

Firstly, the previewing of PDFs whilst editing an invoice is broken. Instead of the PDF, it just shows the message:

PlatformException(error, Promise was rejected with a value of 'undefined'., null, null)

Here’s an image with the full stack trace: 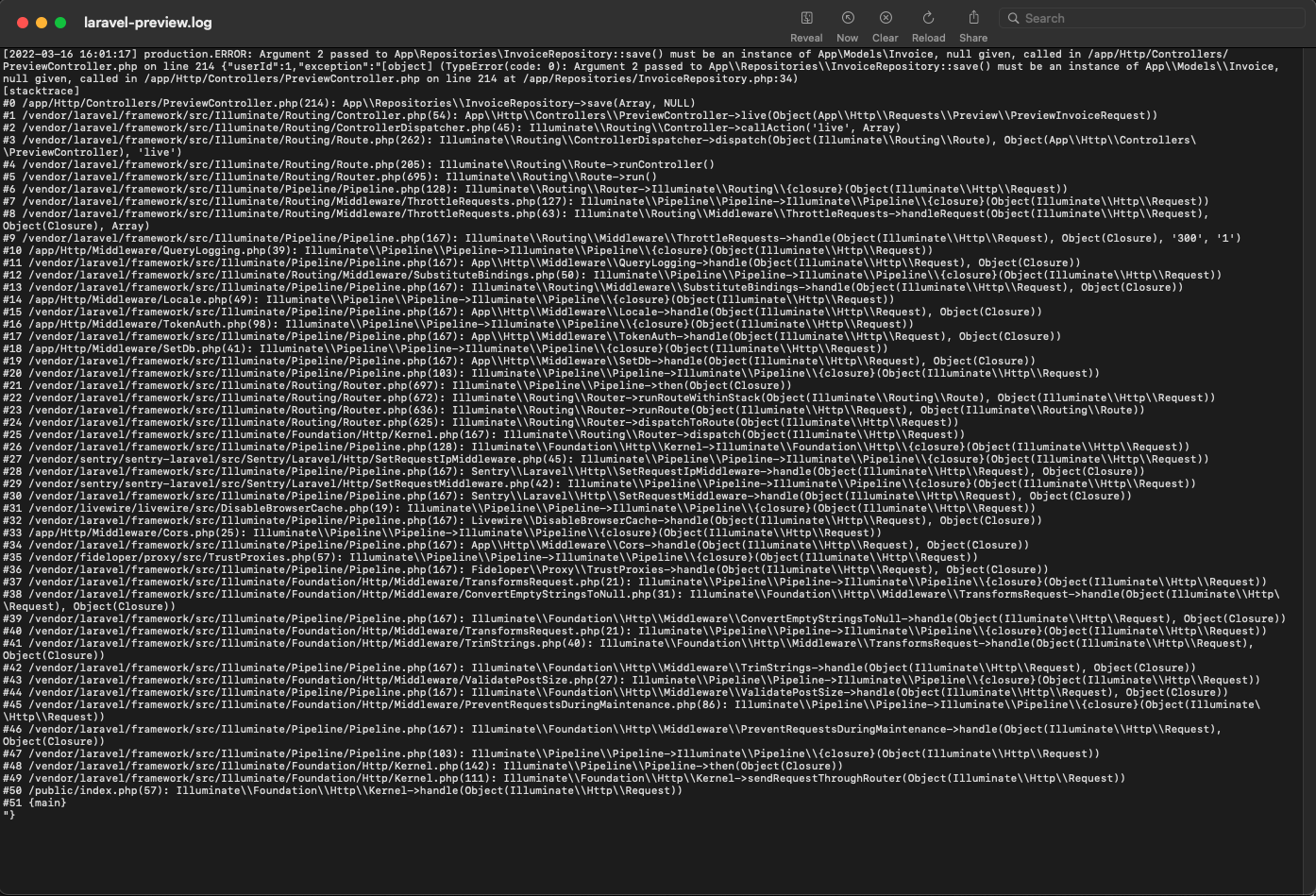 I am a white label customer, so I am using Invoice Ninja hosted for PDF generation.

If I select ‘View PDF’ from the menu, that will generate and view the PDF perfectly. It’s just the preview whilst editing that is broken.

As a side note, when the PDF generation fails, it completely crashed the IN desktop app on MacOS Monterey. I’m having to use a web browser now to access IN.

Secondly, when I go to email an invoice, it will show the PDF invoice OK on the screen, however it will then display a 500 server error in a popup that cannot be dismissed (even though it has a ‘Dismiss’ button, that button doesn’t work).

In the background I can see that it has not displayed my email template, so I guess that’s where it’s failing. The log file says:

I was going to put an image of the full stack track here, but as a new user, I can’t. I can add it as a reply if needed.

Another odd thing is that before the update I had to go to /public/ for IN to work. Now going to that URL shows a 404 and I have to go to the plain / URL to get into the system.

I have used the ‘Force Update’ function and then I can again use the /public URL to access the system. No idea if this is related, but it’s definitely strange.

No idea if I actually need to have /public on the URL, but when I first installed IN 5 it would not work at all unless I did. Now it half works from both URLs.

I’ve run ‘artisan optimize’ several times and that changes nothing.

I wish I’d never clicked that update button, everything was working perfectly before. I have invoices that need to go out.

Any advice? I’ve been a happy customer of IN for years, paying my white label fee each year, but v5 has been absolutely terrible in terms of stability. Migration was an utter nightmare and getting everything to work properly took me a whole weekend (and I develop web apps for a living!).

@david can you please advise?

I’ve seen one other report of this, but we haven’t been able to determine the specific issue are you able to roll back to 5.3.66?

If you want I can try rolling back. I went back to version 4. I have version 5 just setting there.

When creating an invoice. I am still getting the PlatformException error.
View PDF just circles. If I click on email invoice I get a 500: Server Error

Do you have a list of modules that are suppose to be installed? There is so many documents. There may be something not installed.

Here is the error:

I went back a lot of version. I can not login in with version 5.3.36 But I have for this error couple of times in the latest version. I am running PHP7.4 PHP8.0 and 8.1 would not even make it work.

If you roll up to 5.3.66, try re-uploading your company logo. That looks to be the specific issue in that error.

in 3.36 that error indicates your APP_KEY in your .env is different.

I’ll have a go at rolling back, thanks for the advice. I’m without Internet access today, so will have to try later. I’ll report back any progress.

Before I roll back, I think I may have been on 5.3.64 previous to the update to the latest. Does this give you any clue as to what may be the issue? Also, should I still roll back to 5.3.66?

Just an update to say that I rolled back to 5.3.66 and all is now well. Everything works fine for me (well everything I’ve tested so far!).

Out of interest, at what point should I update again? Do I just leave it at 5.3.66 forever?