Once in a while I have to issue refunds or cancel an invoice that has already been sent to a client. I know the credits feature has been revamped recently but it’s still a bit rough around the edges and I prefer seeing everything invoice-related on the same page, hence I use negative invoices when I need to cancel or refund invoiced sums.

Overall, the feature works quite well, but there are some quirks that need to be ironed out, I think.

Success! The client has been refunded and everything balances out.

Now, about what doesn’t work, let’s go back to step 2.

But the invoice status doesn’t actually update and it’s stuck at “Sent”:

No new payments are created either.

Also, if I try to go back to that invoice and edit it in any way (even without touching its amount, by say, editing the Invoice Terms) I get this error: 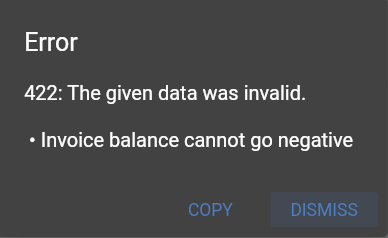 But let’s assume for now that the invoice is OK and does not need to be edited further and that I just need to apply a negative payment to it.

However, the client “Paid to Date” now gets zeroed with the payment:

The Balance is still at -$500 because of the sent negative invoice, though.

So, all in all, the only way I found to make negative invoices work properly is to mark them as paid while they are still in draft mode. Everything else, from sending the negative invoice, to creative manual negative payments does not go as intended.

In retrospect, here are the bugs/quirks:

Thanks in advance for looking into that!

Thanks for the detailed feedback!

@charles thanks for the detailed post, it really helps.

I think we are close now to covering everyone’s use cases with credits. I’ve attach a video with the latest functionality which will be included in the next release.

There will be complete support for negative invoices now. You can also mark a negative invoice as paid, this will create a negative payment and REDUCE the clients paid to date value by the balance which remains on the invoice.

To handle the use case where a negative credit needs to be generated with an associated negative payment these can also be generated. These are essentially identical to negative invoices now however they are marked as a credit note.

Cross referencing to Payment can't be applied to a credit note

Thanks a lot for the fixes and the new features!