What are the invoice status_id numbers? - would be helpful to return the actual status text in the response

I was using zapier in for updating my workflows in v4 which I had to convert the status_id to the text in which case I had an array I would reference and convert. But it seems as though the status_ids are different in v5. 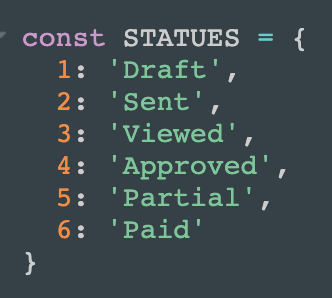 The v5 statuses are available here:

Can this be included in the response by chance?

@david what do you think?

We can add it as a feature request

Is this an update on when this feature request will be implemented?

I am testing this out on an invoice that is “past_due” (status_id should be -1).

But whenever I trigger an invoice update via webhook, I keep getting status_id = 2.

The status you are after is the calculated status. We need to determine the status at the time of the request so it needs to be calculated. Currently this isn’t exposed in the API.

So there is no way I can get the ‘calculated status’? I believe this functionality existed in v4. This is useful for me to properly update my invoice statuses in my CRM and in Airtable to quickly view invoice statuses.

I noticed a new webhook event called “Late Invoice” will that give me the “Past Due” statuses? When will this webhook trigger?